September Bride of the Month 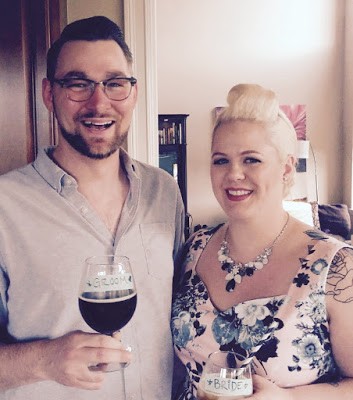 Their Story:
Adam and I FIRST met in our 1st hour history class, at the start of our 8th grade year in middle school! Adam always made me laugh and we quickly became friends. We stayed friends through high school, and then I went away to college and we were out of touch for a little while. Until one day after class, I received a voicemail from my old friend Adam! I called him right away because I was so surprised that he found me….this was pre-Facebook…he still remembered my parents home phone number! He called them one night to see how he could get in touch with me, my mom remembered him and gave him my #! After I heard his voicemail that day we were best friends again, we didn’t miss a beat! Flash forward a few years later, to when we were both finally single at the same time, after a long discussion over a few beers, we decided to try it out and officially start dating each other!
The Proposal:
Adam proposed to me on my 30th birthday at my parents house, in front of all my family and his mom. I had NO idea! Everyone knew except me and my two nieces…they would’ve spilled the beans…6 year old’s aren’t very good at keeping secrets. He proposed to me with my grandmas engagement ring. I love vintage anything, and it’s also a sentimental piece, which means a lot…it’s perfect.

Wedding:
We are getting married at MOCAD (museum of contemporary art Detroit) in Detroit
I guess our “theme” is just an awesome cocktail party, or just awesome party in general!
I’m also trying to keep an underlying theme of “Detroit” incorporated into the event, but not totally in your face or cheesy. For example we are using Detroit’s BonBonBon chocolates for favors/place cards/extra dessert, hiring local artists/friends for photography and video, Adam and his best mans ties are from Cyberoptix Tie Lab, which are hand silk screened ties made in Detroit. We want to support the amazing local artists and businesses we have right here in Detroit as much as possible!
Our colors are hot pink, black and sparkly/glittery gold
We have 5 people in our wedding party: my sister in law is my Matron of Honor, Adams brother is the best man, my brother is his other groomsman, and my twin nieces are the flower girls/ring bearers, who will also be standing on my side.

YTB is excited to be a part of your special day!