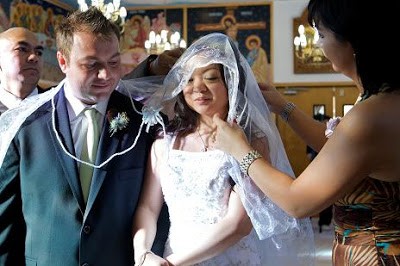 Just a little bit of information for you on Filipino weddings and their traditions.

Attire: bride traditionally all white, groom in a traditional barong, barong is a transparent button up shirt

Sponsors: many sponsors are present to witness, the sponsors symbolize guidance and support, they are a group of individuals that the couple can refer to in a time of need, many are “silent” in participation while four are not (preferably two from each side of the family), two men and two women, males are called Ninong and females Ninang, one male and female couple are the veil sponsors, during the sanctus portion of the ceremony they pin a veil on top of the brides head and onto the shoulder of the groom, the veil symbolizes unity and that the couple are clothed as one, the other couple are the cord sponsors, the cord sponsors place a white cord loosely around the necks of the couple in a figure eight configuration, the chord symbolizes life long bond or tie between the bride and groom

Ceremony: after the sponsor duties are done the bride cups her hands under the groom’s cupped hands, the priest dribbles thirteen silver coins into the groom’s open palms trickling like water into the brides hands, and from her palms into a plate held underneath by a sacristan, trickling is a sign of fidelity bestowed and completes the marriage contract, the priest recites prayers over the couple and will continue with the nuptial mass at this point, then comes the Yugal (silk cord, strand of coins/flowers or even diamonds) which the cord sponsors intertwine loosely around the necks of both the bride and groom symbolizing union, the candles, lit by the candles sponsors (any two people), are a reminder of God’s presence, the traditional unity candle is usually done as well.

Order of entry: priest stands at altar as march begins, best man leads the way, followed by grooms men, then groom follows, marching with him to his left is his mother, behind him on his same side is his father, and to his father’s left is the mother of the bride, behind the families are the primary sponsors, female sponsors to the left of males, once cannot choose his parents but could choose godparents, they are like second parents, behind primary sponsors are secondary sponsors (the veil, chord, and candles sponsors), they are friends of bride and groom, bridal party follows in this order: ring bearer, bible bearer, flower girl, bridesmaids, maid of honor, then bride with father, she stands to the left of father.

If you need us to coordinate your Filipino wedding give us a call at 248-408-4602 or email tracie@yourethebride.com.

The Real Cake Boss Are The Odds In Your Favor?