June Couple of the Month ~ Randi + Danny, The Henry 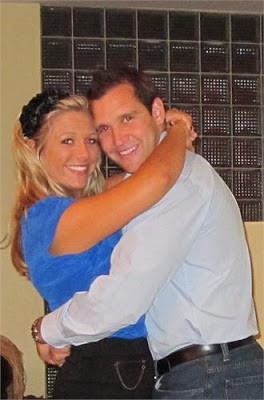 June’s featured Bride of the Month is Randi and her fiance Danny!  The couple met October 11, 2003.  Danny played hockey for the USA hockey team at the Ann Arbor Ice Cube, the same rink Randi figure skated out of.  They practiced on separate sheets of ice across the hall from each other.  Since they spent the majority of their day in the same rink, they saw one another constantly in passing.
Randi ended up getting her first job at the rink’s concession stand.  Danny had broken his shin and was spending his days at the rink in physical therapy, wandering the rink, watching the figure skaters, and eventually making his way to the concession stand. She remembers the moment perfectly…She was stuffing her face with a soft pretzel when Danny waddled up on his crutches, so romantic (haha).
The day of their proposal was July 1, 2011.  After 8 years of dating and an 8 hour drive from Chicago to Torch Lake, Danny pulled into A-Ga-Ming golf course saying he heard the clubhouse was remodeled and wanted to check it out. Randi said “Ok, I’ll wait in the car.” After an awkward silence followed by what he knew would get Randi “Well…um…don’t you want to come and take pictures?” (Randi takes pictures of everything so didn’t think twice).  Danny walked to the top of a hill looking down on Torch Lake where Randi delayed the process even more making him pose for pictures with the beautiful scenery.  Five pictures later Danny proposed, Randi sobbed, and his family and friends came out of no where! Climbing out of cars, coming out from behind bushes, crawling up the hill from the bottom.  She was absolutely shocked, had no idea, and it was exactly how she wanted it to be!

Randi and Danny are getting married August 18, 2012 at The Henry Hotel in Dearborn, MI. They have a bridal party of 14, seven groomsmen sporting gray suits and seven bridesmaids styling navy dresses. The flowers featured in their wedding will be in the colors of white, light pink, and coral. We at You’re The Bride are thrilled to be a part of Randi and Danny’s special event and cannot wait for the big day!

Church Decorations Getting The Munchies?