Detroit May Bride of the Month ~ Lindsay 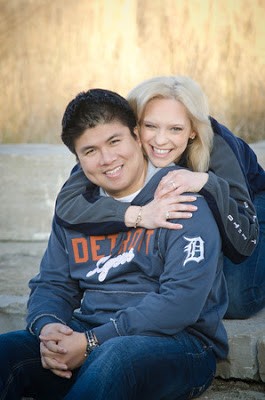 May’s featured Bride of the Month is Lindsay and her fiancée is Erwin. Lindsay and her friend Emmy who happened to be Erwin’s sister were students at Champion Karate. Erwin was and still is an instructor there. Lindsay then went her separate way to concentrate on her studies and after six years she revisited the new Champion Karate. They spent a few nights out with mutual friends and Lindsay finally asked Erwin out. On their first date they took a walk down to Hart Plaza and this began their love story.

The day of their proposal Lindsay and Erwin went downtown to the Motown Museum with Emmy and another friend. This was followed by dinner and some fun at the casino.  Erwin had suggested a walk down to Hart Plaza again where they reminisced about how it all began and then Erwin got down on one knee and proposed.

Their wedding will be taking place June 16, 2012. The ceremony will be held at St. Anastasia Catholic Church in Troy followed by their reception at The American Polish Cultural Center. Their wedding party consists of 3 bridesmaids and 3 groomsmen. The colors they have chosen are teal and orange. Lindsay and Erwin have had many great memories in Detroit and have decided to name their tables after streets in Detroit. They will also be incorporating the Filipino traditions into their mass. We at You’re The Bride wish Lindsay and Erwrin a happy wedding day and are excited to share in their event!!