You’re The BrideTestimonial from a favorite Bride! 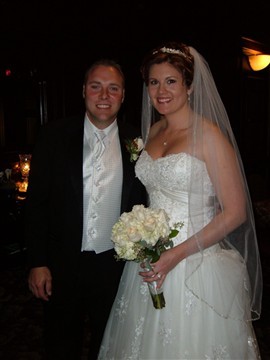 I was cleaning some files off of my computer and ran across this wonderful testimonial that my bride, Jillian, wrote for me last year. I never had an opportunity to use it formally because it was sooooo long so I just thought I would post it on my blog. Thanks, Jillian your so kind! xoxo

The thought of hiring a wedding planner was always more of a dream than a reality. Having never missed an episode of ‘Whose Wedding is it Anyway’ or ‘Bridezillas’, I was preparing for my wedding long before the engagement ring donned my left ring finger. However, once the wedding planning began and the project task list continued to grow, having a full-time job and maintaining sanity planning this blessed affair became unbearable. The stress of getting everything done on time was not as large of a concern compared to how the day was going to pan-out seeing as I couldn’t be the Bride and the wedding planner simultaneously. Hence, researching the surrounding area wedding planners that offer day of services turned me to wedding planner extraordinaire Tracie Morris.

My overall goal and expectation of hiring Tracie was to simply be able to Hand off the Wedding Baton the night before my wedding. Being comfortable delegating and relinquishing control over nine months of planning and the coordination of a party that amounts to nearly one-half a years salary (sad, I know), was not an easy task. That is, until, I met Tracie. There is a certain comfort and overwhelming ease of being in the presence of someone who ‘just get’s it’. During our first appointment, Tracie reviewed all of the items I had planned thus far, supplied recommendations for those I had not yet confirmed/ researched and served as an enormous asset in the world of weddings. I never realized at the time I booked Tracie the benefits I would reap & amount of money I would save.

In the market today, many people will tell you that it is consumer dominated. Being the ever cautious consumer, paying large sums of money for items such as flowers, linens and invitations is nerve racking, especially when you are not familiar with the line of vendors. It’s nothing similar to clothing shopping, which I will admit I have an ‘Expert’ status in . . . you do not have the luxury of knowing the quality of how a product is manufactured prior to walking into the store. Tracie was able to provide expert feedback and valuable information, saving me huge amounts of time and money. For example, I had received two quotes from comparable linen companies that were in a five-hundred dollar range of one-another. Still not being comfortable spending 2500.00 dollars on rentals, Tracie referred me to a linen company she frequently works with. I set up an appointment & ended up getting equally identical linens for only 1300.00. That saved me 1200 dollars!

The same thing happened with the wedding invitations. I received a quote for the invites I loved, however, tossed and turned over spending 1200.00 dollars on paper that may get thrown out. Tracie was able to order the invites through her wedding planning company as a vendor and the grand total was 900.00. That’s another 300 dollars saved! Along with the extra income, I was also able to use Tracie’s input on how to word, format, & what she see’s with other brides regarding invitation wording. The invitation vendor I would have went with for more money I truly believe would not have been able to provide me with that level of expertise and experience.
Overall, Tracie’s day of services fee was paid for x2 for and I still get to have her as a day of planner and resource for the next two months. She is a wonderful resource if you are a Bride like I who is planning and funding her own wedding and needs someone On Her Side for opinions and feedback. I highly recommend hiring Tracie & I can’t imagine doing this without her

Fore Lakes Golf Club ~ David and Susan get married 7-3-10 Did you know we offer Birchcraft invitation samples for free?