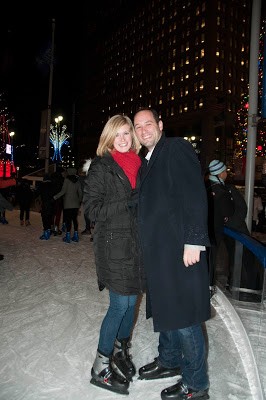 We
met on the dating app called Tinder. I downloaded it one day, to check out what
all the hype was about. I swiped right on Rob, and started talking. He was
working late on a trial in Grand Rapids on a case (he’s currently in law school
and works with lawyers) and I was working night shift as an RN in the
ICU at the time. He asked me to go to a Tigers game, so on April 25, 2015,
we had our first date.
We
had so much fun together, and instantly connect. So, 8 months later, on
December 3, 2015, he asked me to be his wife. I had been working that day,
talked to him a few times throughout the day, but he was “busy” and
couldn’t talk too much. He wanted to take me to dinner that night, since finals
were coming up for him and he would start getting even busier. I came downtown
after work, met him at the skating rink in downtown, Campus Martius, which I’d
been begging him to skate every time we would walk by 🙂 we get there, get our
skates, and take a lap around. He starts to complain about his knee hurting, after
only one lap! Being a nurse, I decide to try to pull over to the side of the
rink with him to diagnose what’s wrong with the knee, and if there’s a chance
we can proceed. Just before we pull off, he raises his hand up in the air. He
almost always sees someone he knows, so I thought he just saw a familiar face.
So we pull off, and he starts to bend down on one knee. Taking me completely
off guard, I fall right in front of him. I see what he’s trying to do, so I
quickly jump up. He proposed in front of everyone on the skating rink! They all
surrounded us and started cheering! I look over, and my friend Ali is among
those in the crowd, catching it all on video! Then looking to the left, I see
Rob’s friend Michael Sharpe (who is an amazing photographer, you should check
out his recent work from Yosemite!) who captures a beautiful picture in front
of the big Christmas tree downtown, which I’ve attached.
We
have had so much love and support, and our families couldn’t have blended
better. With his parents being the most amazing in-laws a girl could ask for, a
sister and brother in law that couldn’t be more welcoming to me, we are
planning to wed September 2, 2016. The ceremony will be at The Cathedral of St.
Paul Episcopal church in midtown, with the reception being at Eastern Market,
Shed 3. We each have 8 people standing, as well as 2 ushers, 2 flower girls and
1 ring bearer. The guys are in charcoal suits with plum vests and ties, and the
girls in plum dresses. The reception is plum/ivory colors and we will seat
people at cross streets (mostly in Detroit) that mean something to us, instead
of table numbers.
We
are looking forward to celebrating with our friends and family, and I cannot
wait to become Mrs. Robert Higbee!

Unexpected Wedding Themes!! Best Spots to Get Married in Detroit