Couple of the Month ~ Allison and Josh

The couple of the month for May is Allison and Josh. Read about their story here.

Both originally from Michigan, Allison and Josh met at Kalamazoo College and began dating in the summer of 2013. They maintained a long-distance relationship while Josh worked on his Ph.D. in structural biology and biochemistry in Colorado and Allison attended law school in Virginia. They moved in together in early April 2020, just as the COVID-19 pandemic took hold of the world. They managed to survive being in each other’s presence 24/7 as they worked from home in a one-bedroom apartment. Josh and Allison now live in a much larger apartment with their black Lab, Bo, just outside Washington, DC. Josh is researcher for the National Institutes of Health and Allison is an attorney on Capitol Hill.

Josh and Allison got engaged twice in November 2020 – once by themselves and then again a week later in front of their families. The first proposal was in between dinner and dessert at an intimate French restaurant in Washington, DC. The second proposal was on the National Mall in front of the Lincoln Memorial. They kept their engagement a secret from their family and orchestrated a ruse to get their families to take photos on the mall. For one last photo of just the two of them, Josh surprised everyone (except Allison) by getting down on one knee. 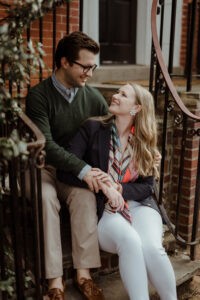 Planning a wedding from out of state and during the pandemic has been challenging, but it was made so much easier by working with Tracie, who was recommended to them by the lovely folks at the Inn at St. John’s. Having a coordinator that is trusted in the business and knows their venue and vendors has made planning less stressful. Allison and Josh chose the Princess collection, which was perfect for them – enough guidance to accomplish the big tasks and check-ins to tackle the small things while allowing them to make many decisions on their own. What was most important to them was having day-of coordination, so that they could focus on the most important day of their lives and leave the rest to the professionals.

Their best advice for wedding planning is to stay organized (or get engaged to someone who is organized)!